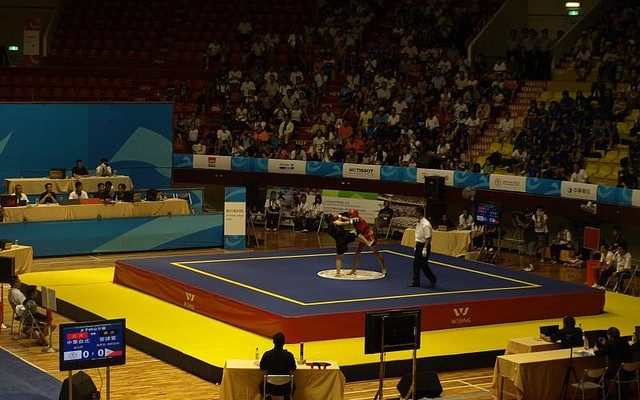 San Shou fighting descends directly from the Martial Duels in Ancient Imperial China where martial arts instructors used to duel on a platform called the LEI TAI.
Going back even more the old fighting techniques date back to the time of the 5 wealth families who at the time donated huge amounts of land to Buddhist temples. These private temples were protected and supported by the families and so the five main schools of fighting evolved producing extensive bodies of fighting techniques, bringing to life the legend of the warrior monks. The most famous of these monks being of course the Shaolin Monks.

After China’s cultural revolution the government wanted to recognise Martial Arts. In 1979 a sanda test programme was launched to develop rules and judging methods for sanda competition. In 1984, The Wushu Administrative Center separated Wushu into two divisions: Taolu (forms) and Sanda. Internationally, sanda became an official event in the 2nd World Wushu Championships of 1993. The female division was included in 2003.

Although the martial roots of sanda are ancient and deeply embedded in China’s history, Sanda as a competitive sport is just coming to its own.
When looking at the constant popularity contest between the different schools of martial arts and fighting championships, San Shou would be the underdog.

This year San Shou as part of Wushu was  short listed for inclusion into the 2020 Olympics, however the IOC decided not to include Wushu this time. Although the IWuF have already pledged to try again next time, whether or not Wushu will finally become an Olympic sport will never diminish the sports magnetic power.

There is a great potential for San Shou to become the combat sport of the future.