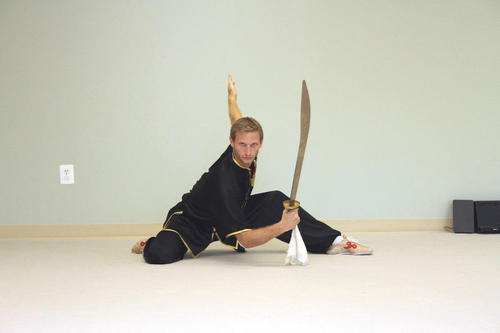 By Eric Meany, The Baltimore Sun

It was the first appearance in the world championships for Benedik, 27, who competed despite being hampered by a stress fracture in his sacroiliac joint and a sports hernia.

“The competition was a great experience,” Benedik said. “The level was about where I expected — some countries being insanely better than others with the U.S. about in the middle. It was very intimidating practicing alongside the best in the world in warm-ups, but I was surprisingly calm. Not as nervous as I would have thought.”

Benedik was particularly pleased by his performance in the compulsory changquan event, in which he finished one position short of a bronze medal.

“It was exciting being third until almost the last competitor [and being] bumped down at the very end,” he said. “At the end of the form I felt I did almost as well as I can do with everything I’ve been dealing with, but I never expected to medal. I just wanted to perform my best, which I felt I did.”

China, as expected, dominated the championships, winning 17 gold medals and one silver in 46 events. Hong Kong and Macau, two special administrative regions of China, added a combined total of five gold and five silver medals. The U.S. team finished with one silver and two bronze. Fifty-five teams competed in the tournament, with 31 winning at least one medal each.

“The competition is so huge and the level is so high, it’s very humbling,” Benedik said. “The competitors are very friendly and embrace the spirit of sportsmanship. It was also very cool to see the people I have been watching on YouTube and trying to be like competing against me.”

Now that he has returned from Kuala Lumpur, Benedik’s first order of business will be to recuperate. He has been slowed by his injuries since early June and acknowledged that he was not able to be as explosive or fast as he would have liked at the world championships. Surgery has been recommended for the hernia, and at the very least he plans to rest for three to four months to allow the fracture to heal.